Jia and I are eternally grateful that three of our favorite artists/humans were willing to lend their time and support of our book, in convenient blurb form.

If you already know Rosemarie Dombrowski, Sean Bonnette, and Matt Hart, then you understand why we love them.

Otherwise, I will be posting a series of entries for each of their blurbs and some personal background on them and their own work and where to find it. 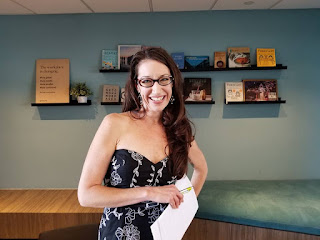 Today I will start with Rosemarie Dombrowski, who sent us a gigantic blurb that she knew would never fit on the back of the book. We almost moved it inside to use like a foreword, but we decided to take an excerpt and keep it on the back cover. Here is the full unabridged version:


Cactus Head (the mask, the man, the poet) is a metonymy for Phoenix—the wastelands and the outposts and the once-iconic venues, all of it juxtaposed with the ever-public persona of a dandy, someone (or something) as ubiquitous as street art and the steel shade structures that line our downtown streets.

The persona that Orion creates through verse – and that Oak Baker brings to life through image –is simultaneously the desert on drugs and in rehab. He is the curator of the ugly-beautiful, the faded bricks and the fairytale horizon. Accordingly, Orion perfectly captures the limbo of modern life with the opening lines of the opening poem: the Sonoran desert is an hourglass/knocked on its side.


But maybe the most delicious part is the fact that the line between ego and alter ego is invisible here, that every poem leaves you feeling as though you’re listening to the wire-tap tapes of some old-school hooligan (maybe Orion himself), like it’s all a veiled confession in the spirit of Whitman’s Calamus poems, arranged and rearranged into a secret sequence of desire and longing—though not for the transcendent, but rather for the ephemera, the scraps of pop culture and personal desire he’s collected along the way. Orion’s leaving them for us like a trail of breadcrumbs, like a topographical map into the heart of Phoenix.

Most importantly, this collection has proven that Phoenix is a real city, its streets choked with culture, the fatty tissue of its heart lined with punk rock politics and poets who are sometimes as hollow as pinatas.


Both of RD's books are out of print and might be hard to find ("The Philosophy of Unclean Things" and "The Book of Emergencies"), but she also has a recent chapbook "The Cleavage Planes of Southwest Minerals [A Love Story] which can be found at Split Rock Review. 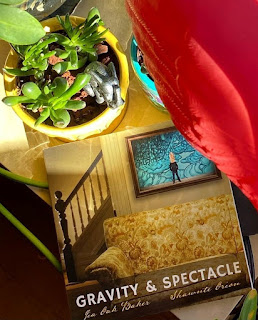 
Copies of Gravity & Spectacle can be ordered from Tolsun Books, Small Press Distribution, and even Amazon.

Or if you'd like to get a signed copy from me, just send $20 (free shipping)
through PayPal https://www.paypal.me/ShawnteOrion
or Venmo https://venmo.com/ShawnteOrion

Posted by Shawnte Orion at 2:22 PM