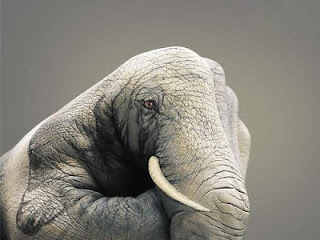 This year's White Elephant Contemporary Poetry Gift Exchange at Glendale Community College was much bigger than last year. We had a wonderful turnout and people were more daring about "stealing" books that caught their attention. Everyone was polite at the start, but once I started introducing books that were worth coveting, we saw some bold moves and books began changing hands.

Books I handed out this year, included:

from "At The Florist"


This City Lights book may have been what got me into poetry, while studying French back in high school. It has the original French on the left page and Lawrence Ferlinghetti's translation on the other side.

I can only carry 100 pounds of bison per trip
so the flies are happy. They prefer the eyes,
prefer to nest on matted hair, crossed like barbed
wire. Today I am selling bison thigh so I can buy
bullets before they rust, so I can shoot more bison.
I am the smallest circle. I am so comfortable
inside myself, these slight progressions of sound.

from "The Oregon Trail sells beef to Winn-Dixie"


An entire book of poems that explores life, love, and dysentery through the Oregon Trail and its metaphors.


I forgive the perfume of clove cigarettes
hanging from your head in curling, frazzled dreds.
Love is carrying water with no rest, despite
the alarm clock, a circle-burnt nerve, the television baby-talking
to itself, endlessly rocking you out of your cradle.
Its shadows wrestle with the distance.


Practice creative problem solving;
for example, that lipstick could be poisoned,
that spiked heel a stabbing implement.
Remember, you are on the side
of the laws of thermodynamics. Entropy
is a measure of disorder.
Chaos, destruction, death: these are your instruments.
Use them wisely. You are no mere mortal.
Don’t lose your cool if captured; chances are,
you can already control minds, bend metal to your whim,
produce, in your palms, fire.
In the end you are the reason we see the picture;
we mistrust the tedium of a string of sunny days.
We like to watch things crumble.


from “Job Requirements: A Supervillain’s Advice”

Don't swing the umbrella in the store,
Mother said. There are all these glass jars
of spaghetti sauce above your head
that can fall on you, & you can die.
Then you won't be able to go to tonight's party,
or go to the bowling alley tomorrow.
And instead of celebrating your birthday
With soda and cake, we'll have
anniversaries of your death with tea
& crackers. And your father & I won't
be able to eat spaghetti anymore, because
the marinara sauce will remind us of you.


Sirowitz' book of Mother poems was a big hit with everyone in the audience who had a mother.

of my worst dates. I get older, my heart
leaps at the sight of children

who don’t belong to me, I pronounce
everything like an Italian opera title.

from "Brief Hist Of My Life Part VII"

no flower can say. I plant marigolds
because they came cheap and who knows
what the earth’s in the mood to eat.

from "The Semantics Of Flowers On Memorial Day" 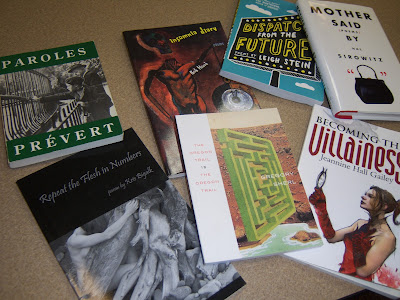 It was also fun to see what books people in the audience brought to share.

A few books that I ordered didn't arrive in time, so I guess I already have a head start on some of the titles for next year's event.
Posted by Shawnte Orion at 6:09 AM